What They Are Saying
“My sound was instantly transformed and I was able to play in tune with an amazing tone that only Oleg products is able to give me.” 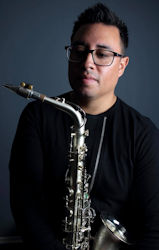 Born & raised in Los Angeles California. Charlie began his musical journey at a very young age. Picked up the sax and the rest was history. Charlie has shared stages with Miel San Marcos and many other well known Latin Christian artists. Charlie has done countless recordings and has been a major key sax player in today’s Latin Christian music community. You can find Charlie’s sax sound on many collaborations with other musicians and artist across the world. Now in days Charlie is on a solo artist venture playing for “Luminous” band and out in the world as a solo Saxophonist.

Dynamic and soul are his main focus on the sax. Influenced by the best in the industry, Charlie Duran is becoming a known name in the Latin music industry. His sound and tone is instantly becoming prevalent and known as a very distinctive voice on his sax. With 3 musical projects out on iTunes, Charlie has captured the attention from musicians alike and music lovers of the genre.