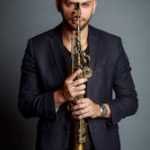 Daniel Morera is one of the most outstanding saxophone players of the music scene in Costa Rica. He has been a succesful musician in very different fields, going from classical to pop and jazz with well renowned musical groups and as a solo artist. Since 2014, he has been playing with the Philharmonic Orquestra of Costa Rica, many times as a soloist. In the full seasons he has performed with this organization, he has shared the stage with well renowned artists both in the Costa Rican and international scene.

In the national e international scene, he has played with artists such as FitoPáez, AdrianGoizueta, Danilo Montero, Humberto Vargas, Jarabe de Palo, and Natalia Lafourcade amongst others, He has also been an opening act for international performers such as Juan Luis Guerra, Franco De Vita, Alejandro Sanz and Michael Bolton.

His preparation, focus, and dedication, have allowed him to perform on the most important stages and venues in Costa Rica, such as Teatro Nacional, Parque Viva auditorium, and Teatro Popular MelicoSalazar. In this last one, he has performed several full seasons with the Philharmonic Orquestra of Costa Rica.

Saxophonist Daniel Morera is a Music Major with an emphasis in teaching and execution of the saxophone from Universidad Nacional de Costa Rica. He has also been part of Master classes with Eric Marietnhal, Bob Franceschini, Alex Terrier ,and CésarLópez.

As a teacher, he has been an instructor for the National System of Musical Education, part of the Ministry of Culture since 2009 until today.