What They Are Saying
“”The Oleg neck not only enhanced the output of my horn but also stabilised my tone and the fluency on the horn across the whole range, giving more sub-tone to my lower end and a boost to the altissimo and overtones at the same time.” – Omri Abramov 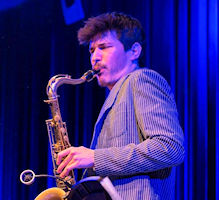 Born in Jerusalem 1989, Abramov started his musical education on the Recorder and Piano, and later on, the Flute. He began his Saxophone training at the age of 13 and set foot in the professional world of jazz at the age of 18 when played the renowned ‘Red Sea Jazz Festival’ with the Berklee Workshops leading ensemble. Graduate of ICM (Israeli Conservatory of Music) in jazz performance and winner of the IACF scholarship for years 2007-2011 with excellency, Abramov received an ‘Outstanding Musician’ status by the IDF which allowed him to maintain his music career throughout his military service. By the year 2011, Abramov had played several times with various groups at some of Israel’s leading Jazz Festivals and by the year 2015 had already played repeatedly in Europe, Israel and the Far East (Thailand, Myanmar) with his group Niogi.

Abramov is currently based in Berlin, Germany and is frequently touring Europe, USA and Israel with Niogi, Sistanagila, Smalltape, his own trio and as a sideman with various jazz and electronic-music acts.